With over 100,000 in attendance, this year’s DCC was one of the best yet! We took our team all three days this year to introduce Bricky Blocks to a wider audience with our friends at The Wizard’s Chest, and boy were we surprised by the response! Read on to find our three takeaways from the third-largest comic convention in the U.S.

What’s the best part of Denver Comic Con, you might ask? Cosplays! From Friday to Sunday we saw cosplays as niche as a Disney’s Frozen Elsa and Marvel’s Deadpool mashup, to classics like Daleks and Storm Troopers — all incredibly detailed and full of creative spins. Nearly everyone at the convention was sporting some kind of pop-culture apparel, and the most incredible part was how many people recognized even the most obscure references (seriously, people actually recognized our Wizard Whitebeard!) Check out some of our favorites below, and if you were at DCC post a picture of your cosplay on our Facebook page!

Almost as incredible as all the creative costumes and cosplays were the rows upon rows of writers and artists showcasing their latest works on the showroom floor. Everywhere we looked we saw T-Shirt designs, poster prints, paintings, and entire tables filled with books we had never even heard of before! There were also some comic book stores in the corners with hundreds (if not thousands!) of comics packed as tightly as they’d fit. On the other side of the convention we saw armies of Pop Vinyl figurines and even a life-size functional BB-8! Our wallets aren’t very happy after all the things we just had to buy!

Along with all the costumes and swag that we saw, the one thing that permeated every aspect of the convention was the vibrant, joyful attitude we felt. Strangers became best friends after barely a minute of conversation, and everyone was posing for pictures simply because someone liked their cosplay. Away from the main floor, people bonded over meticulous LEGO constructions while in another corner friendships were made and destroyed with games like Settlers of Catan. 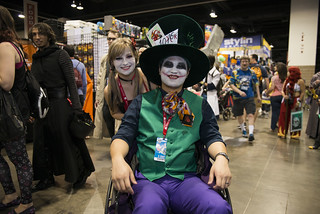 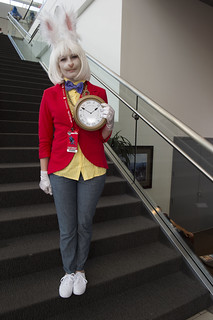